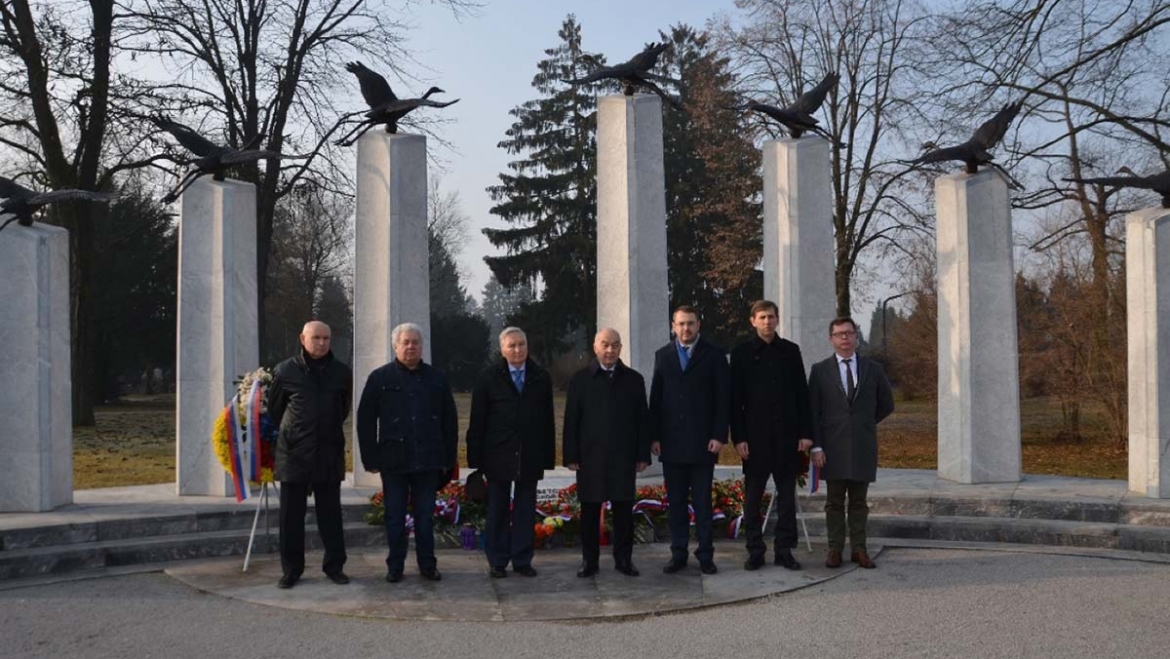 The main topic of discussion at International Research Centre’s February 2019 conference was “WWII: Myths and Truths”. The embassy, which works for the institution, recommended a central topic that would tie well to the upcoming 80th anniversary of WWII’s beginning, namely the tense and tumultuous political history of the late 1930s, which up led to the bloodiest conflict in human history. 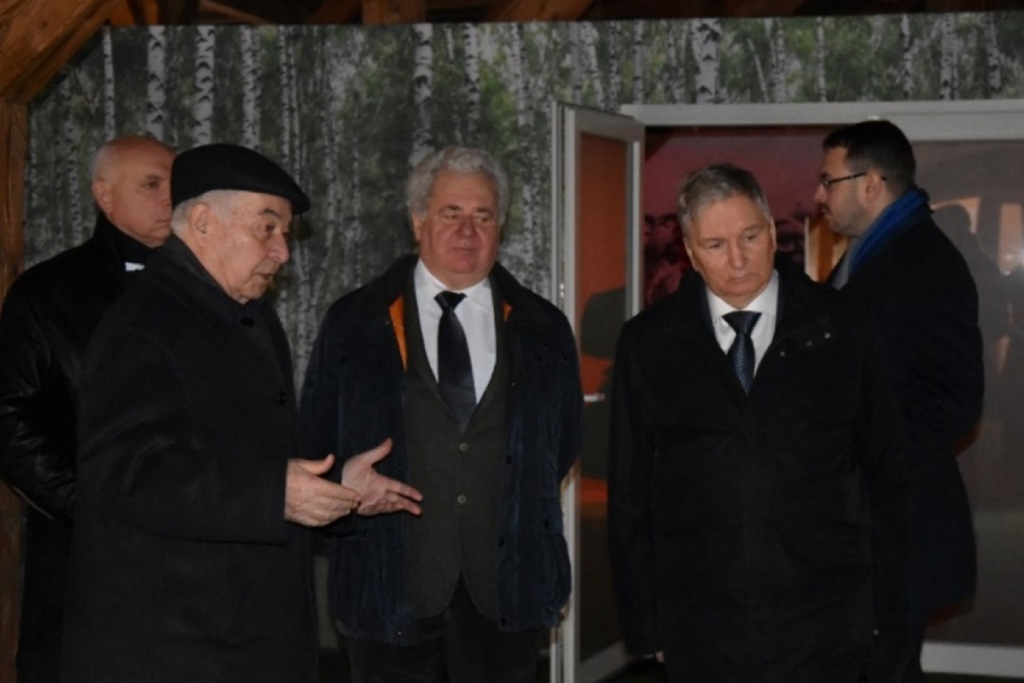 The International Research Centre’s exhibits viewed by (front row, from left to right) D.G. Zavgayev, Russian ambassador to Slovenia, E.I. Pivovar, president of the Russian State University for the Humanities, M.V. Lomonosova, head of the Faculty of History, and S.P. Karpov of the Russian Academy of Sciences.

At the conference’s opening, D.G. Zavgayev, Russian ambassador to Slovenia, stressed the importance of keeping the right tone in discussions and the need for an objective treatment of the preconditions and reasons behind the beginnings of WWII, and the importance of the decisive role and responsibility taken by our country in combatting fascism and standing resolutely against Nazism and criminal ideologies.

Those last topics were thoroughly and extensively developed in the thoughtful speeches given by historians from the Russian Historical Society, M.V. Lomonosova, head of the Faculty of History at Moscow State University, SP. Karpov, Russian Academy of Sciences, E.I. Pivovar, director of the Russian State University for the Humanities and Russian Academy of Sciences member, K.I. Mogilevski, executive director of the “History of the Homeland” fund, and E.M. Kozhokin, vice-rector for research, professor at the Department of International Relations and Foreign Policy of Russia. All of their speeches illuminated modern scientific approaches to researching the causes and factors leading up to WWII, the role the Munich Agreement played in 1938, and the circumstances that brought about the Soviet and German non-aggression pact of 1939. Conference attendees resoundingly agreed upon the importance of a good historical education, especially for young people. Much interest was attracted by an analysis of historiography from the era, including information on new collections found in Russia waiting for experts to pore over. 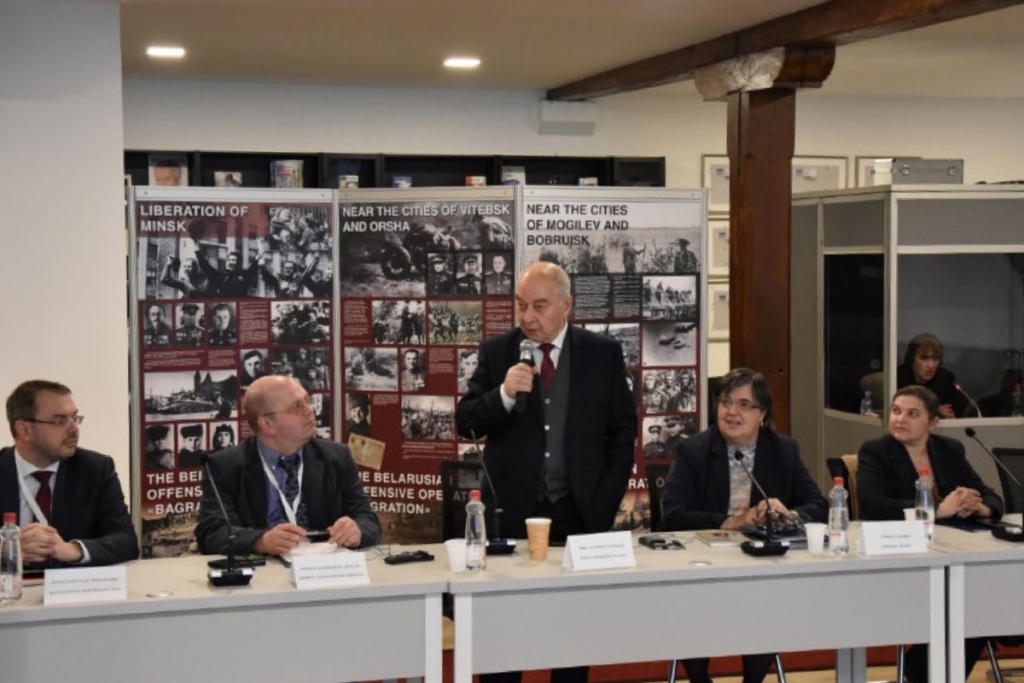 (from right to left) At a conference session. K.I. Mogilevski, executive director of the “History of the Homeland” fund, G.A. Shepelev, professor at the National Institute for Oriental Languages and Civilizations (Paris), D.G. Zavgayev, Russian ambassador to Slovenia, G.I. Zamyatina, consultant at the Russian embassy in Slovenia, E.A. Breskvar, president of the coordination committee for organisations of Russian speaking immigrants in Slovenia. 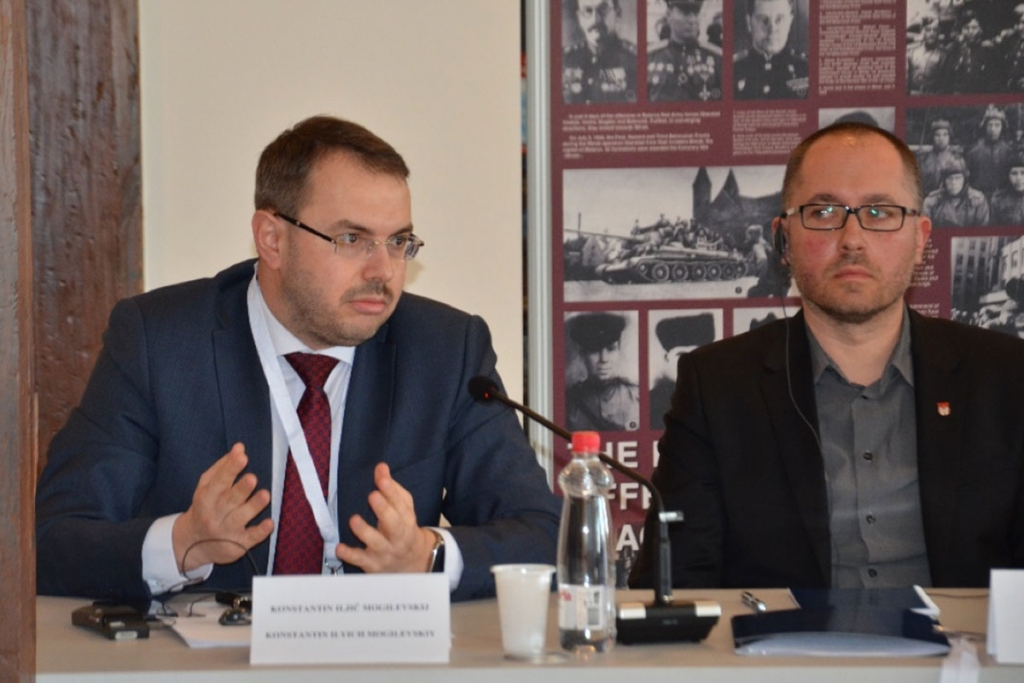 K.I. Mogilevski, executive director of the “History of the Homeland” fund and member of the board of the Russian Historical Society (left), and Gregor Reichenberg, deputy mayor of Maribor. 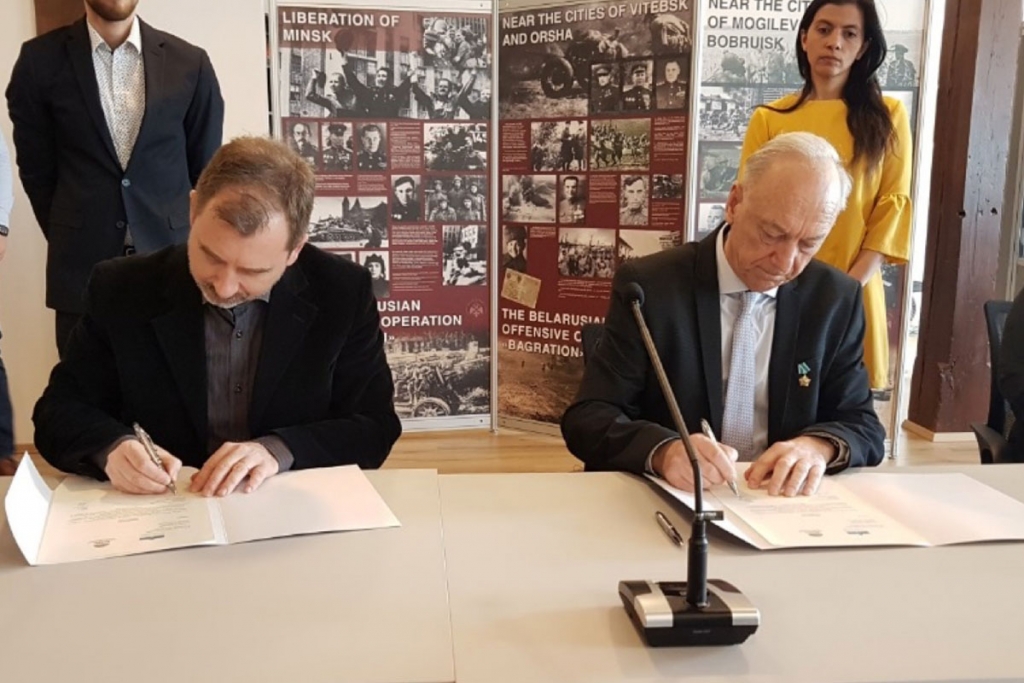 Part of the conference saw the signing of a cooperation agreement the International Research Centre and the humanities department at the Faculty of Arts and Humanities at the University of Maribor.

Many topics introduced by the speakers deserve further treatment in the future. Among these included methodology used to find in contemporary history myths spreading about the “good occupier” (G.A. Shepelev, professor at the National Institute for Oriental Languages and Civilizations (Paris)), “humane conditions” in Nazi “working camps” among the Baltic countries (E. Zakarite, Ireland), and “aggressive Soviet politics on the eve of the war” (S. Vukovič, Montenegro). M. Kulbačevskaja, a reporter from Poland, talked about specific incidents showing today’s false slander of Warsaw’s “historical policy”, the hidden role of leftist forces in the anti-fascist resistance. I. Vasileska, University of Skopje, Macedonia, and I. Baeva, University of Sofia, Bulgaria, outlined in their speeches direct parallels between contemporary attempts from leading Western powers to put pressure on their “younger partners” as regards how the “Balkan Entente” came to be, and as regards the conclusion of the Munich agreement. 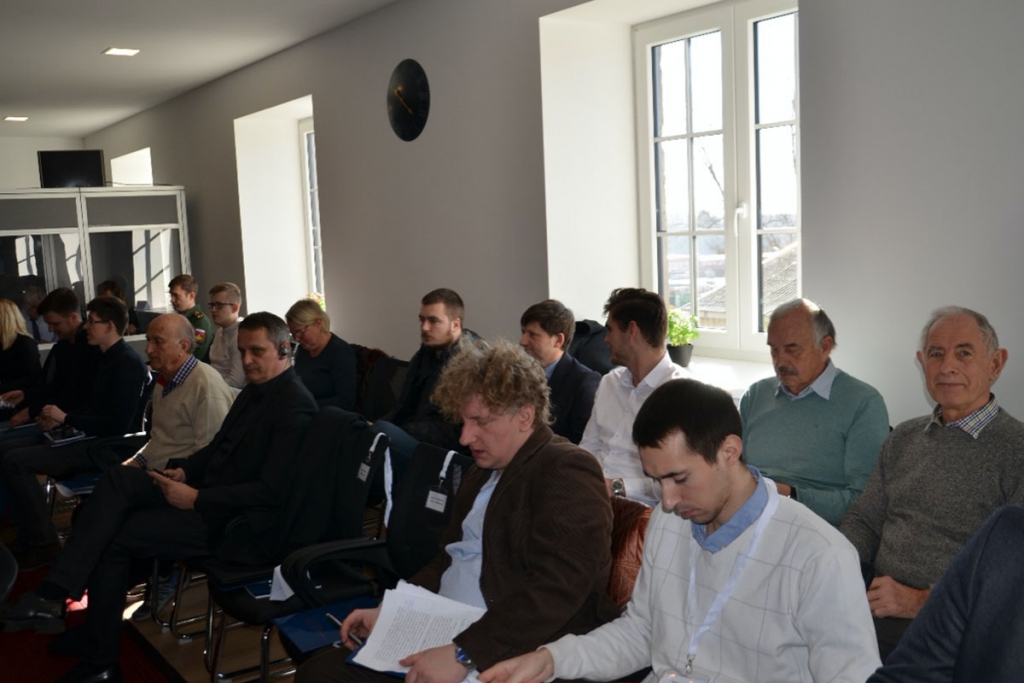 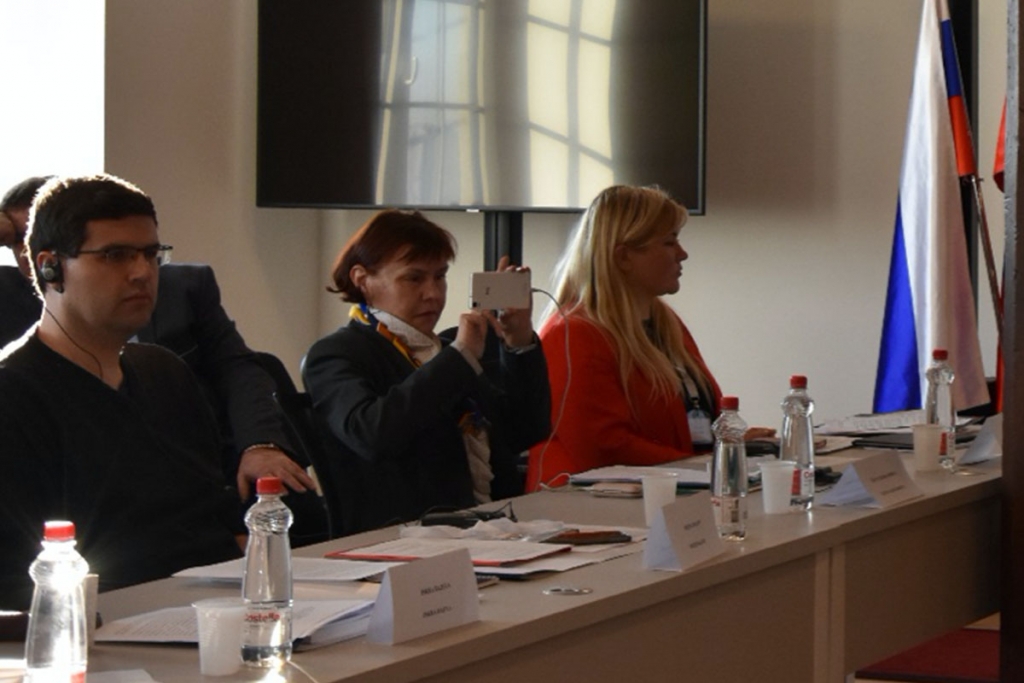 Speeches from J. Esser (Austria), A. Petrovič (Moldavia), and F. Afanasov (Romania) were also very well received, as they contributed to a rich exchange of opinions on the methods and forms of organizational investigation of information in various European countries. Proposals for collaborative efforts were met with constructive discussion, including on the establishment of common databases on the fate and names of Soviet citizens of former Yugoslavia that fought in the national liberation movement (G. Bajc, University of Maribor, Slovenia, A. Životič, University of Belgrade, Serbia), and of those that died in Nazi prison camps throughout Europe (V. Guska, Great Britain). S. Radovanovič, Slovenian researcher and archivist, meticulously collected information from archives on prisoners of war at the Maribor concentration camp.  H. Aleksandrova’s (Spain) speech focused on the fate of foreigners who fought among the ranks of the Red Army. 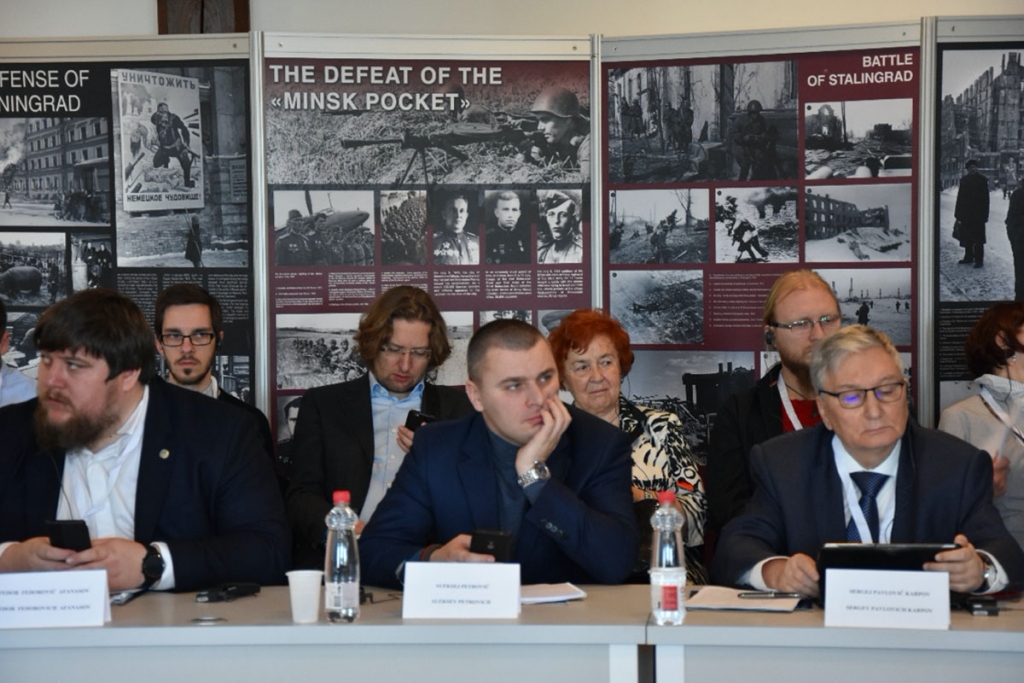 (front row, from right to left) At a conference session. F. Afanasov, public figure from Romania, A. Petrovič, director of the “August” research group in Moldavia, M.V. Lomonosov, head of the Department of History, Moscow State University, S.P. Karpov, scientist from the Russian Academy of Sciences. 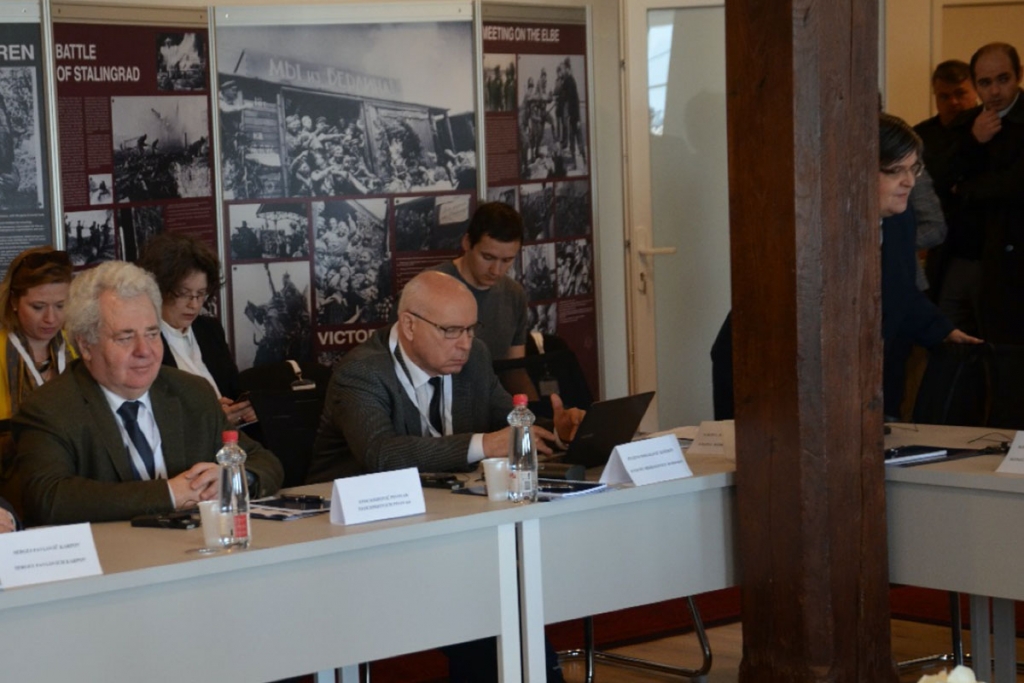 At a conference session (from left to right), E.I. Pivovar, member of the Russian Academy of Sciences, presiding member of the Russian Historical Society, E.M. Kozhokin, Vice-Rector for research, professor at the Department of International Relations and Foreign Policy of Russia, doctor of history. 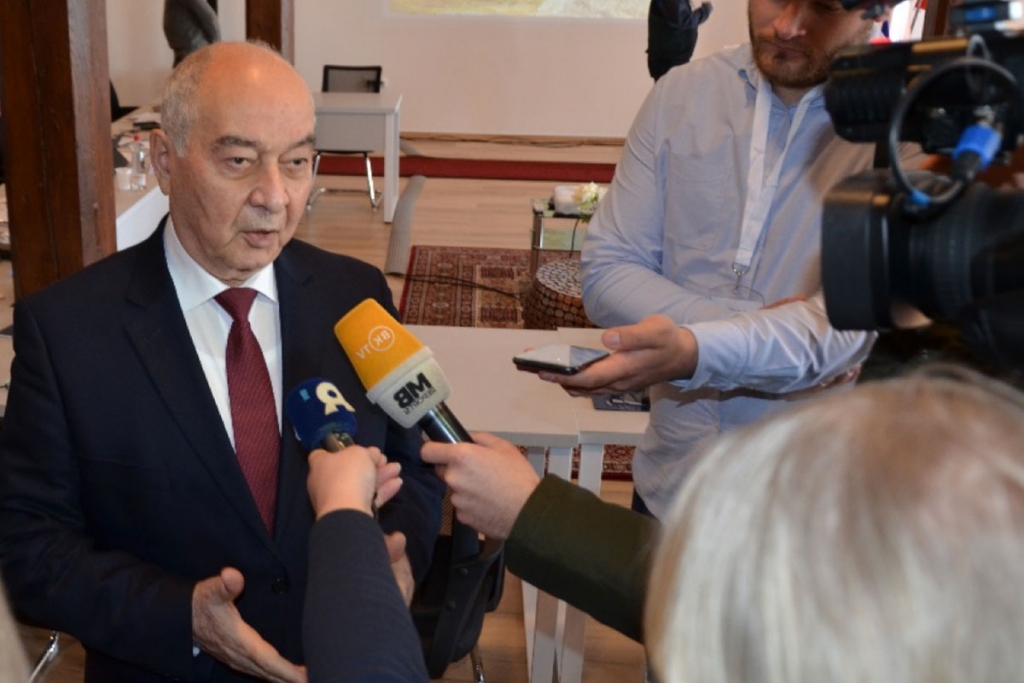 D.G. Zavgayev, Russian ambassador to Slovenia, gave an interview to both Russian and Slovenian journalists, highlighting the international conference. 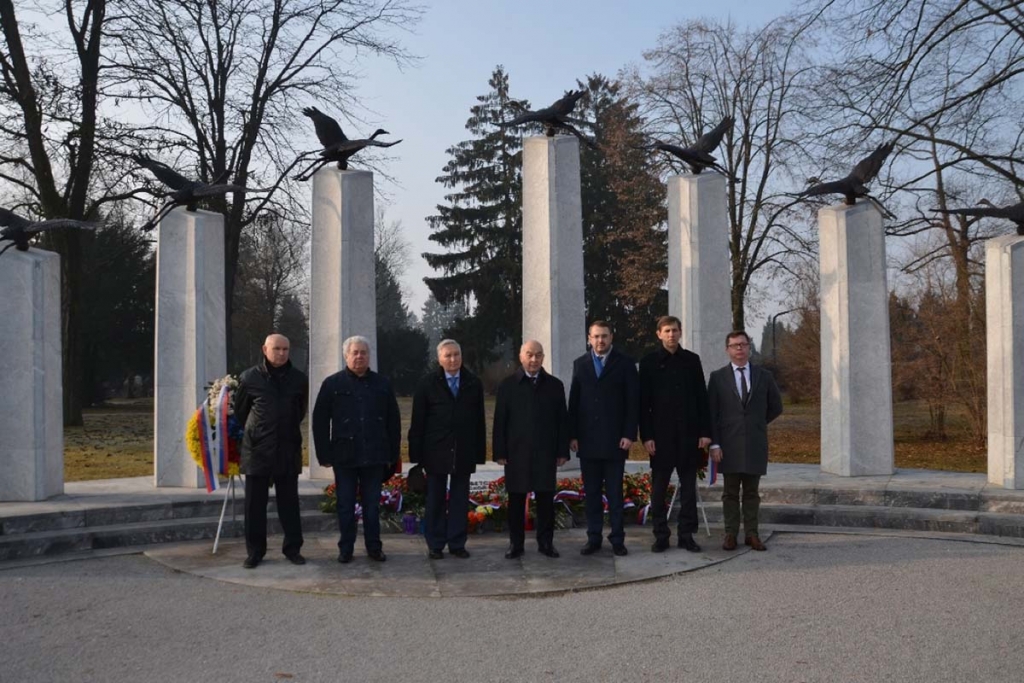 Russian conference attendees traditionally laid flowers at the Monument to the Sons of Russia and the Soviet Union who fell within Slovenian lands, which was unveiled by Russian president, V.V. Putin, July 2016, Ljubljana.