1st Conference »UNDERSTANDING THE PAST FOR A BETTER FUTURE« 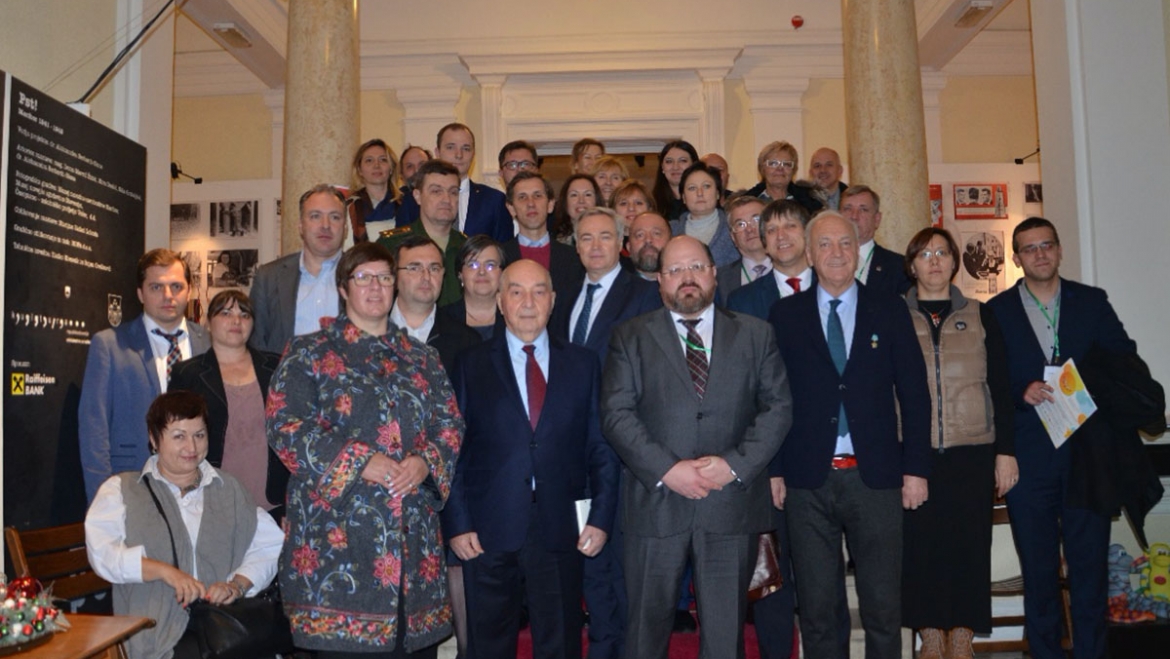 In tandem with its efforts to resolve organisational, legal, and technical issues concerning the establishment of the International Research Centre, the Embassy in December 2017 held the first international conference at the Centre entitled “Understanding the Past for a Better Future”. The event was attended by scientists, historians, public officials, and politicians from Russia, Slovenia, Austria, Italy, Latvia, Serbia, and Croatia. More than 20 talks were given at the conference, all stressing the need to preserve historical truths about the events of WWII, as well as the need for modern methods of communicating such truths to the public in general and young people in specific. The conference’s programme showed the need for international collaboration on this extremely important topic. 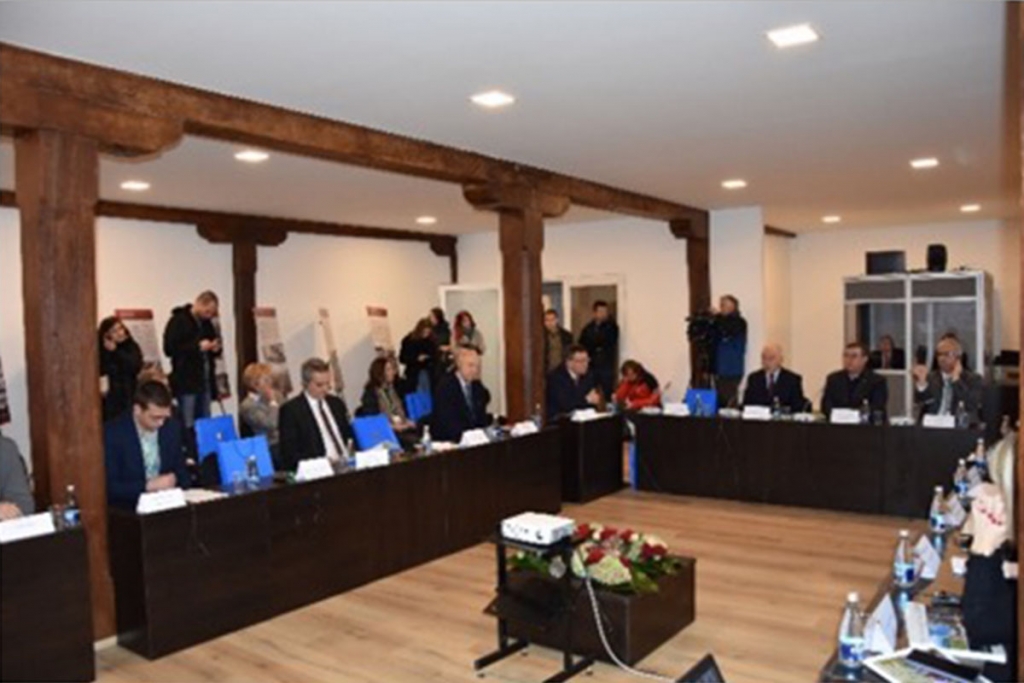 The plenary session of the international conference “Understanding the Past for a Better Future”.

At the opening event Dr Doku Zavgayev, Russian ambassador to Slovenia, described in detail the tasks and objectives set by the International Research Centre, and further expressed his gratitude to the forum’s attendants and for the productive exchange of experience regarding the study of history about WWII. He emphasised the need to preserve the truth about the past and memory about the joint effort of European Allied nations in combatting Nazi and fascist aggressors.

The ambassador reminded attendants that the Centre, in spaces open to the public, attests to the horrible events wrought by Nazis. This sets a high moral standard for all the Centre’s researchers, as well as for all its visitors, forcing us to ponder what must be done to avoid reviving the horrors of Nazi ideology, the spread of neo-Nazism, and the rise of other dangerous radical movements. 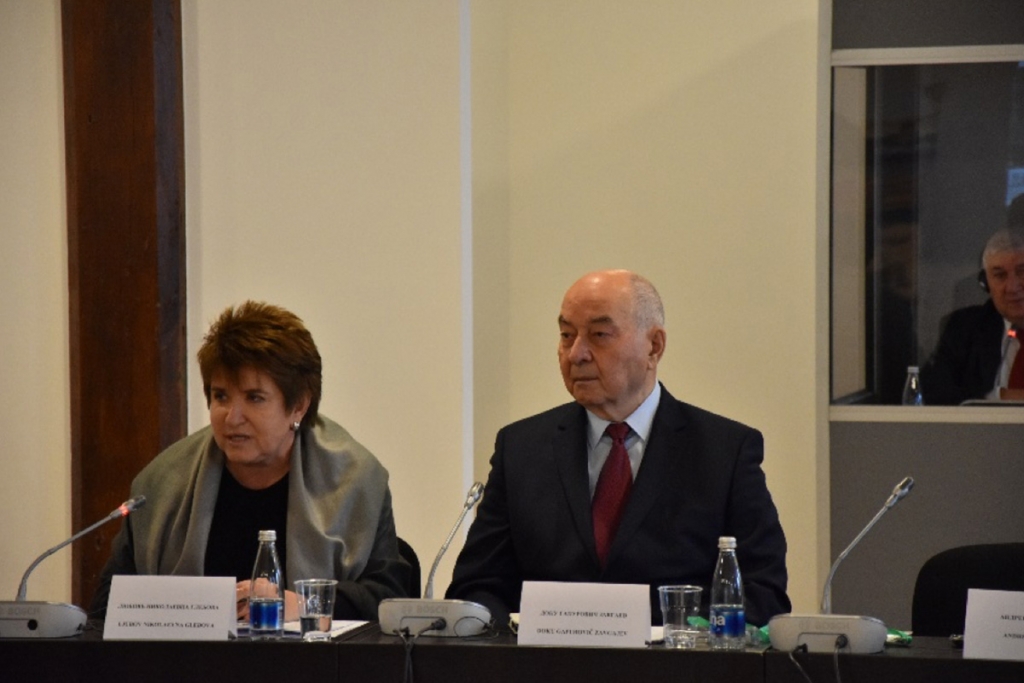 (from right to left) Dr Doku Zavgayev, Russian ambassador to Slovenia, and L.N. Glebova, vice chairperson of the Federal Council Committee on Science, Education, and Culture, at the plenary session.

The Slovenian contingent backing the development of the project at the International Research Centre included Andrej Fištravec, mayor of Maribor, and Uroš Prikl President of the Parliamentary Committee on Labour, Family, Social Policy and Disability, who is discussing actions on commemorating the war. 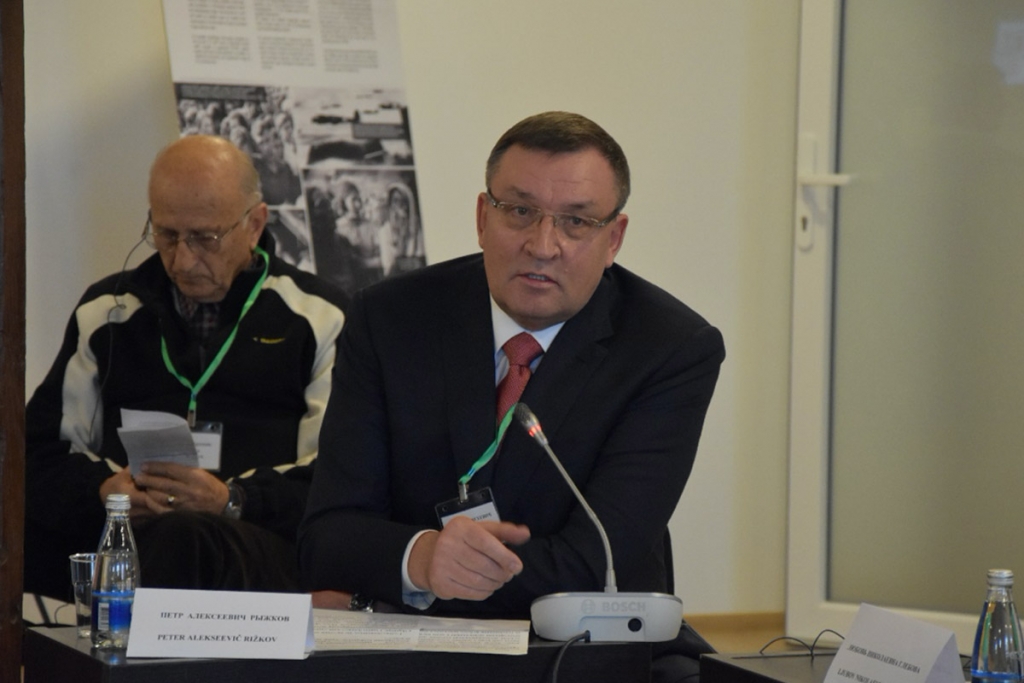 P.A. Rizhkova, Russian businessperson and president of friendly and cultural ties between Russian and Slovenia, who, at the embassy’s request and through one of his companies with his own money, helped fund major renovations at the Centre that helped launch research pursuits. Forum attendants listened to Rizhkova’s words with respect and gratitude. 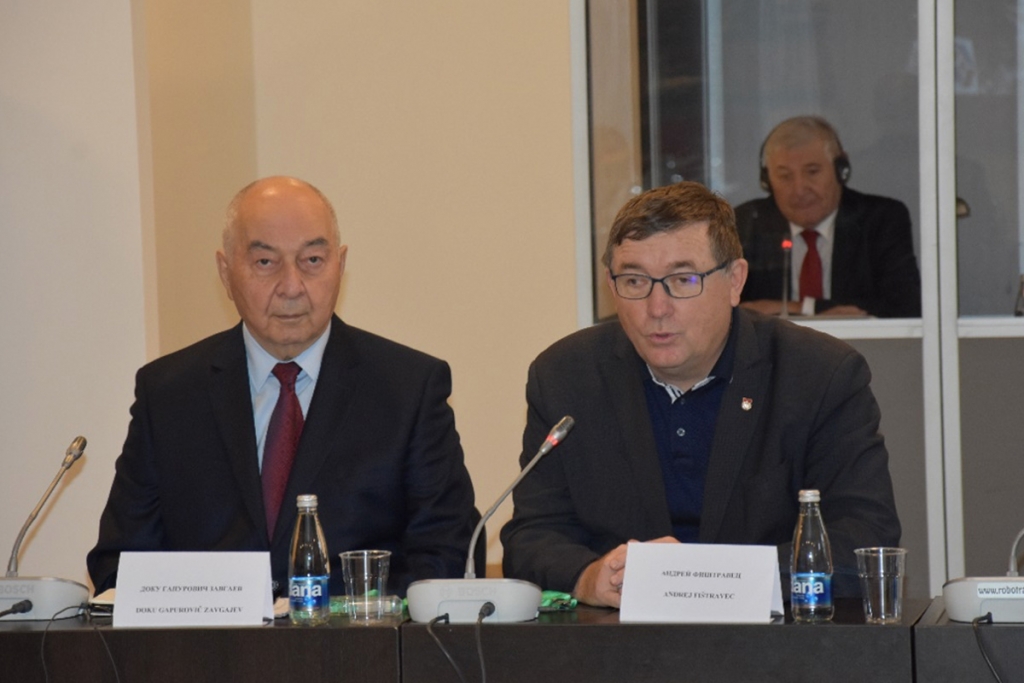 The keynote address, entitled “Historical Memory as a Means of Social Diplomacy”, was given by L.N. Glebova, vice chairperson of the Federal Council Committee on Science, Education, and Culture, and G.E. Lukyantsev, deputy director of the Russian Foreign Ministry’s Department of Humanitarian Cooperation and Human Rights. Their speech touched on the objectives and tasks outlined in the adoption of the UN resolution that Russia spearheaded, calling for action to combat the glorification of Nazism, and received a very warm response from those in attendance. 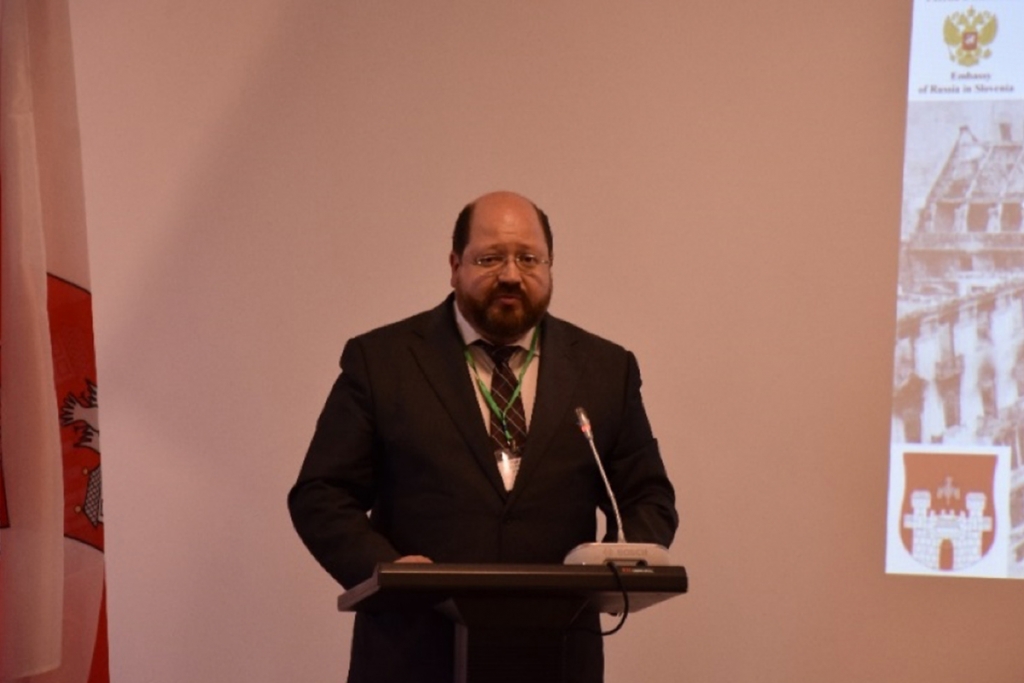 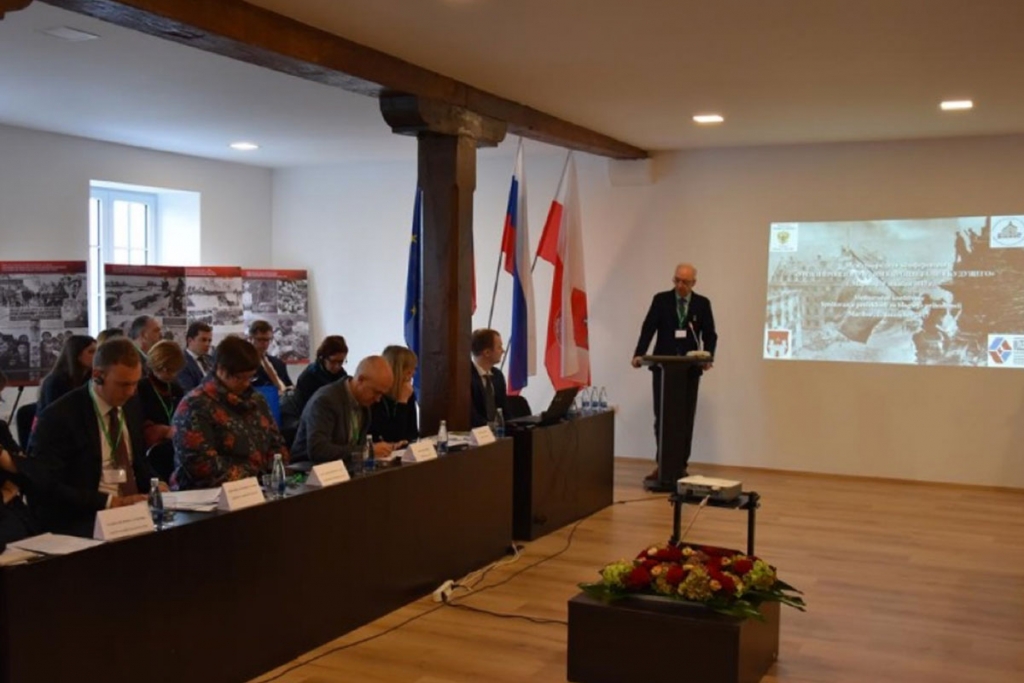 Details about how important it is to seek information about fallen soldiers touched all conference attendees, especially the poignant testimony given by Viktoriya Klyukonaya (Latvia), granddaughter of Russian soldier Peter Danilo, who died in the Maribor concentration camp.

Representatives from museums, archives, scientific institutions, and other public organisations from several countries presented the results of their latest research, forging close bonds and strengthening their collaborative spirit with the Maribor International Research Centre.

Great interest was also drawn by Lidija Pliberšek, president of the Association of Significant Cemeteries in Europe, Janko Boštjančič, director of the Pivka Park of Military History, and others. 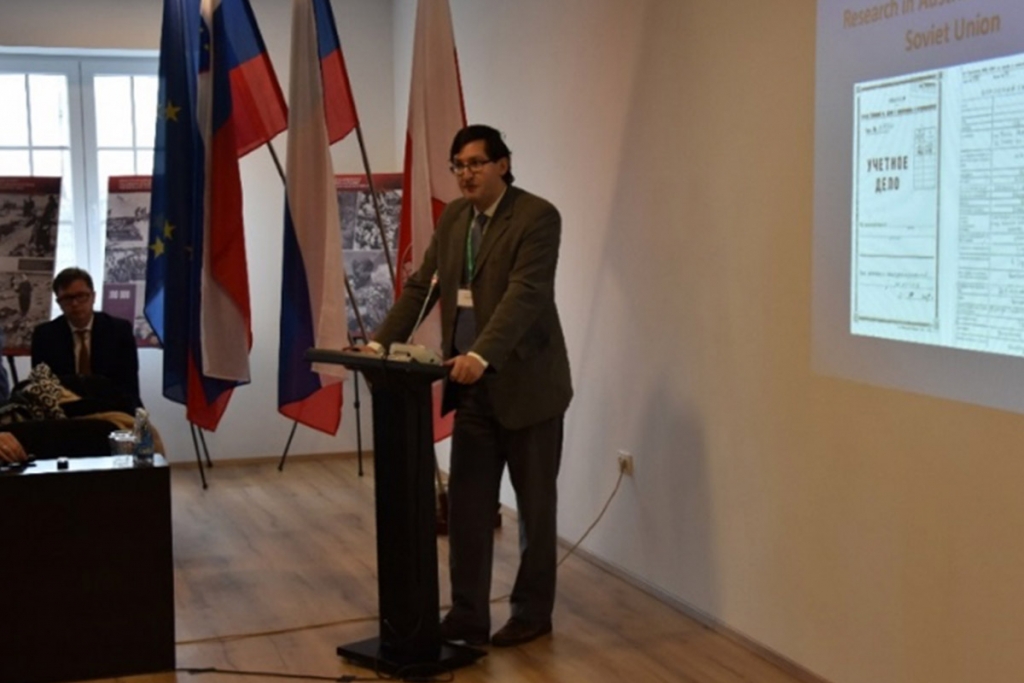 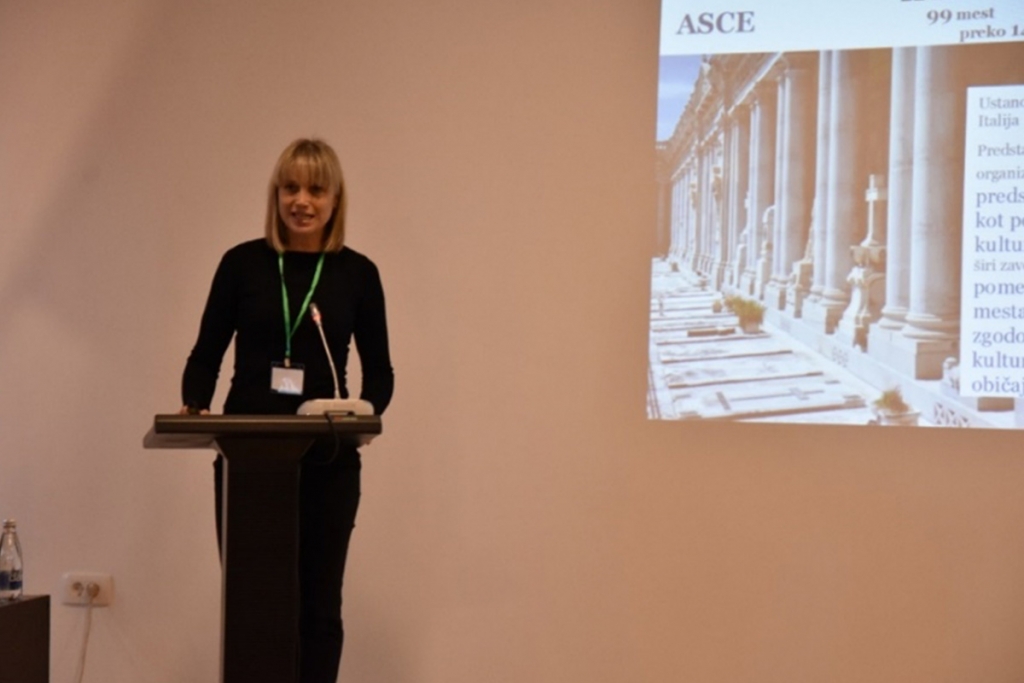 Lidija Pliberšek, president of the Association of Significant Cemeteries in Europe.

A separate part of the plenary session was dedicated to topics concerning young people. J. N. Mesarič, director of the Russian School in Ljubljana, gave remarks about her experience regarding historical memory as an element of fostering patriotism in children and teenagers, touching on the Russian Chapel and the Immortal Regiment.

E. Titomir and A. Salanja, representatives of Russischer Kulturverein, an Austrian compatriots’ organisation, spoke about the Carinthian organisation’s endeavours to preserve historical memory about WWII; E.A. Breskvar, president of the Coordination Council of Russian Immigrants in Slovenia, spoke about war and patriotism, among other things. 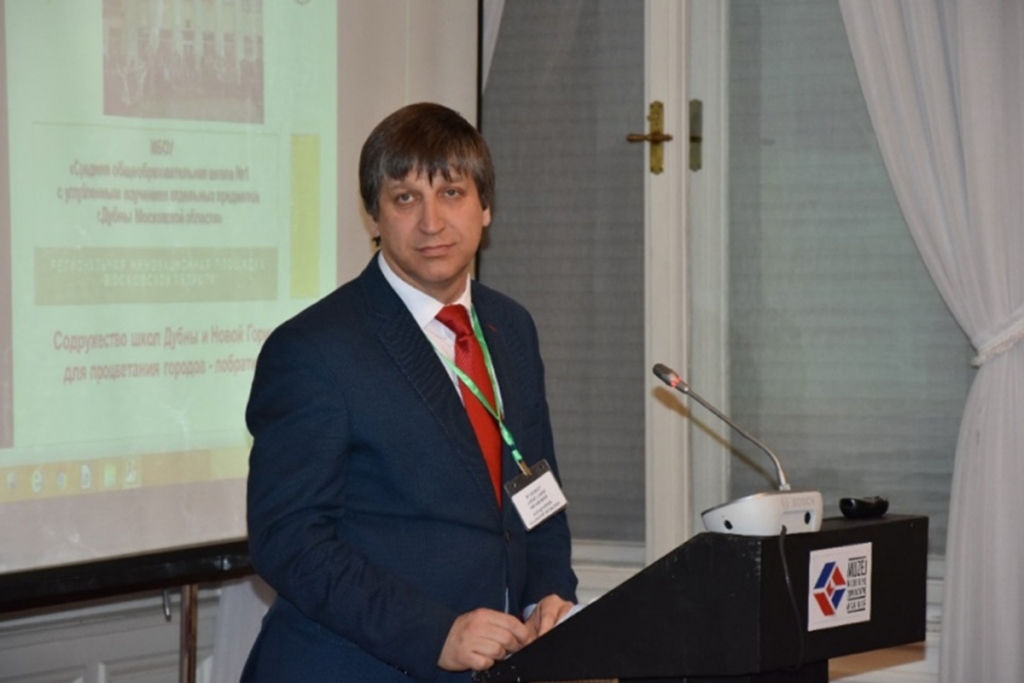 Alexander Rudenko, headmaster of a high school and deputy head of the city council of Dubno in Russia, shared his experience with twin cities in terms of the educational institutions of Dubno and Slovenia’s Nova Gorica, highlighting how to develop interest and respect among young people for historical events. 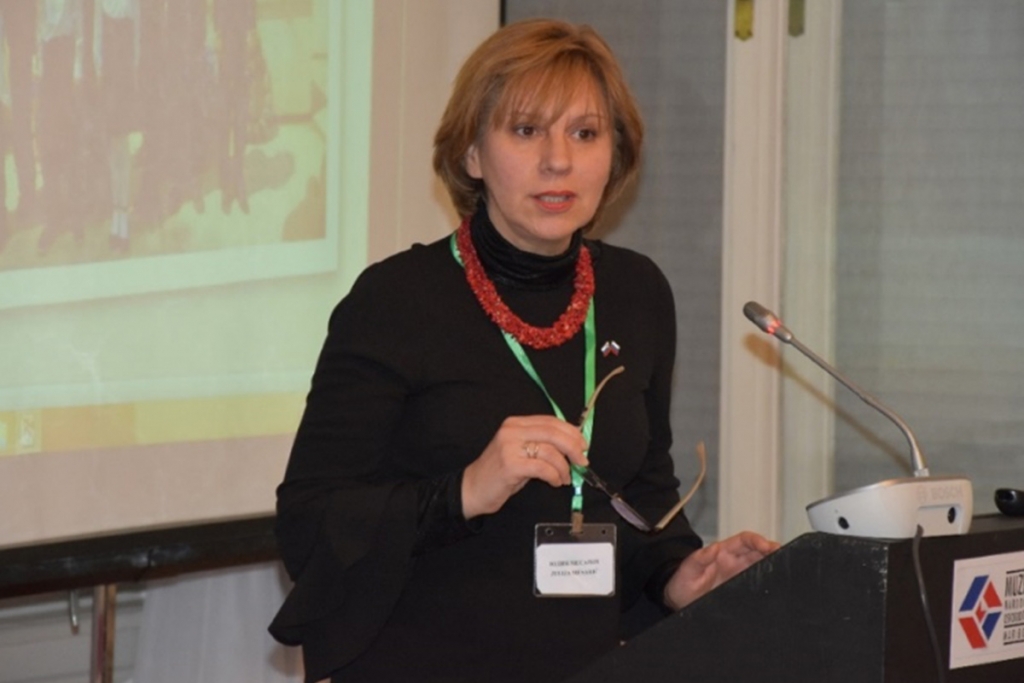 Remarks by J. N. Mesarič, director of the Russian School in Ljubljana, “Historical memory as an element of fostering patriotism in children and teenagers”, the “Russian Chapel”, and the “Immortal Regiment”. 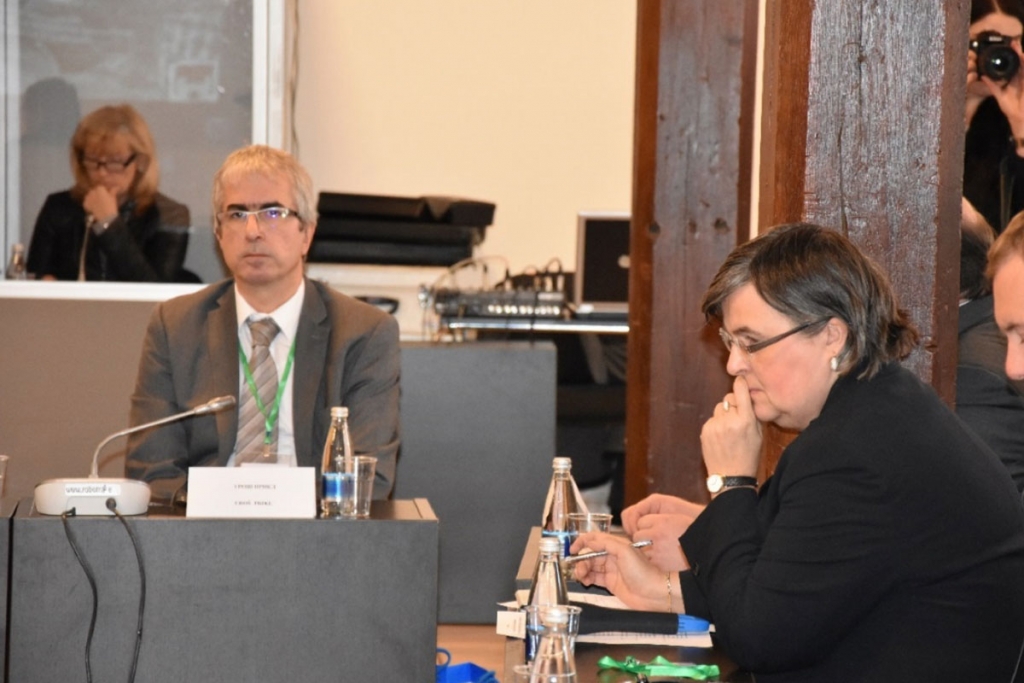 (from left to right) Uroš Prikl, president of the Slovene Parliamentary Committee on Labour, Family, Social Policy and Disability, and G.I. Zamyatina, counsellor at the Russian embassy in Slovenia. 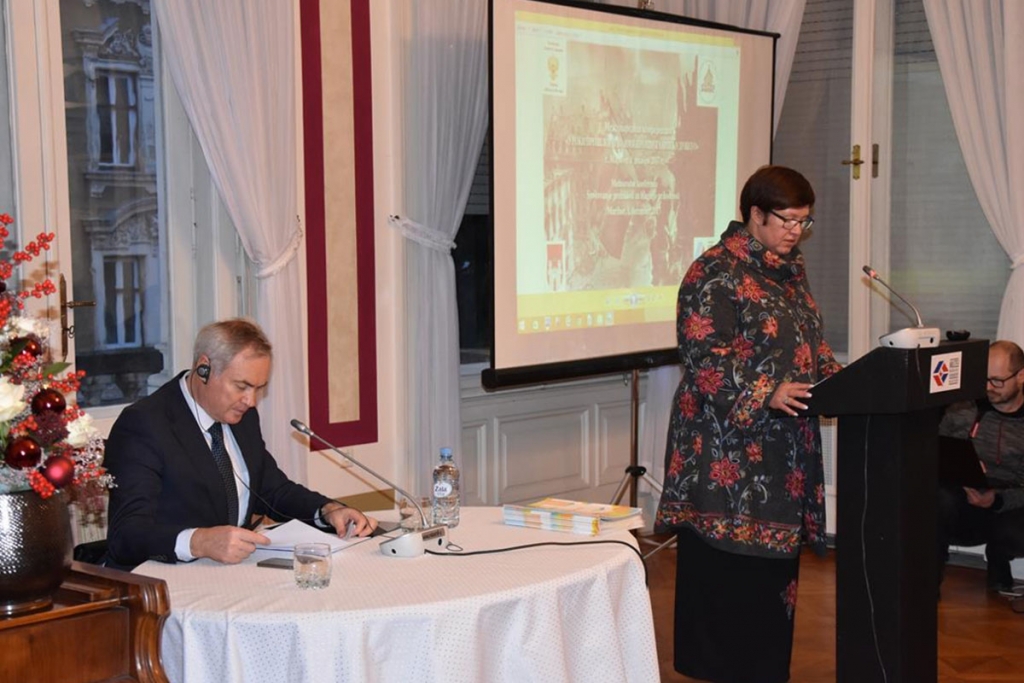 J.A. Meteljev, director of the Russian Scientific and Cultural Centre, and Aleksandra Slaba Berber, director of the Maribor Museum of Contemporary History and deputy president of the Council of the International Research Centre.

One of the results of the conference was an adopted resolution on the importance of reviving international collaboration in hopes of preserving our history and memory of the events and lessons learned in WWII, and of instilling upon younger generations a spirit of peace and internationally friendly relations. Conference participants confirmed their commitment to continue with the projects they have launched so far together, and to continue working together on matters related to history and on developing and producing educational goals and content. 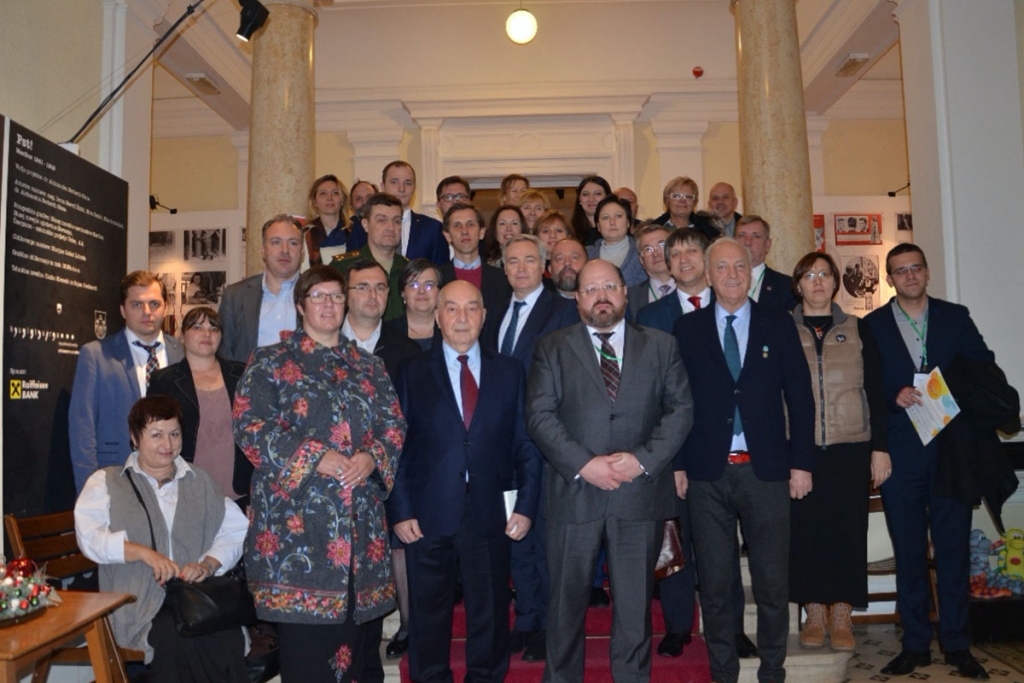 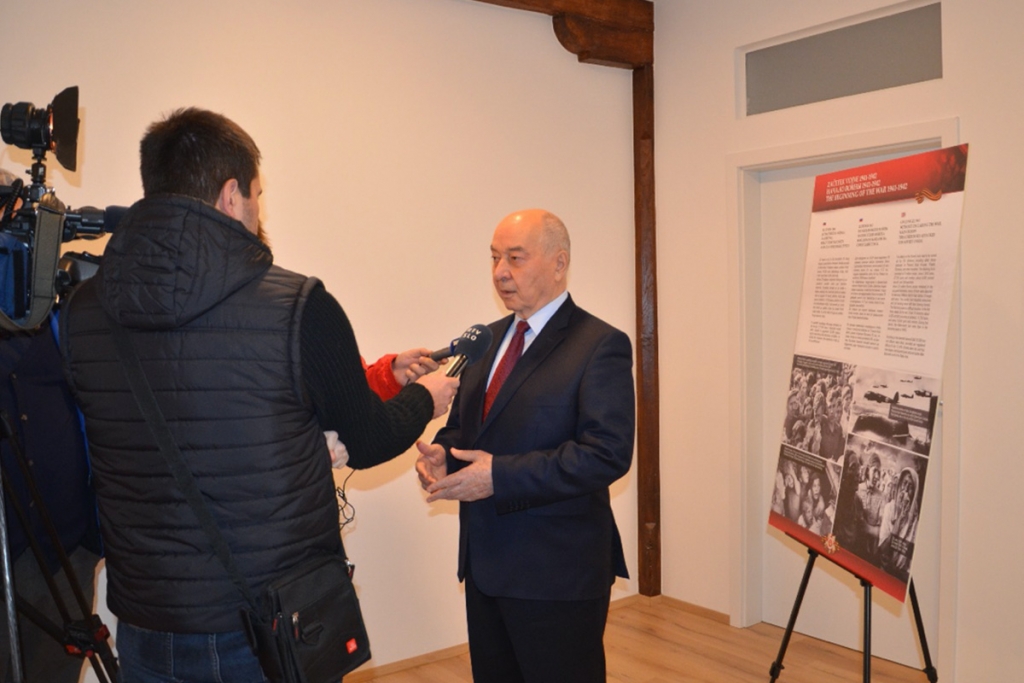 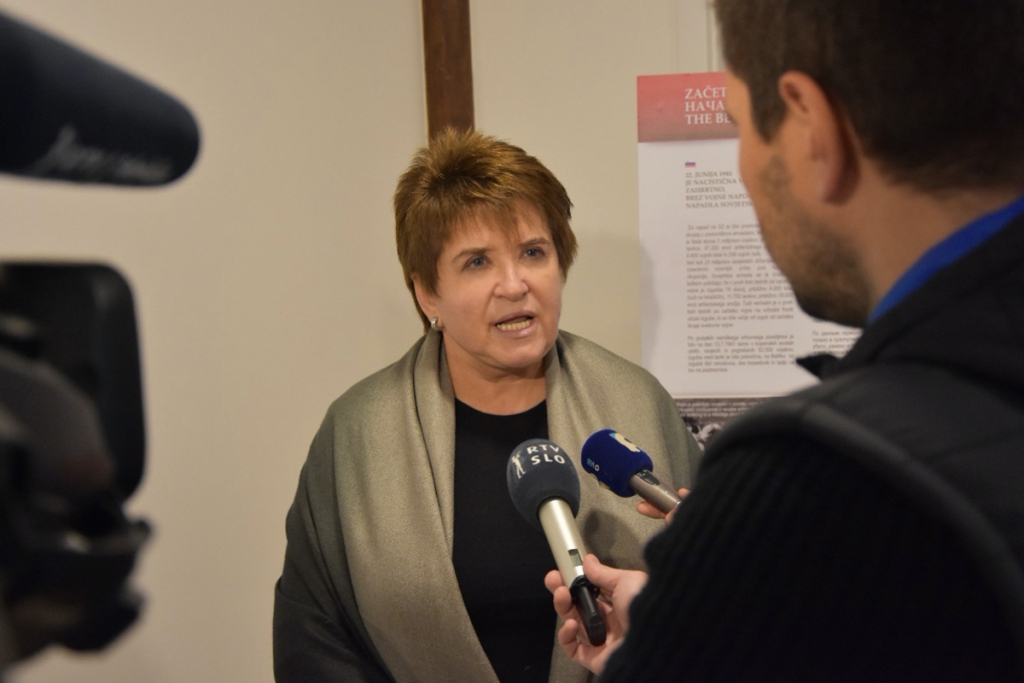